The Swim and Dive Championship Sponsored by the HoHoKams 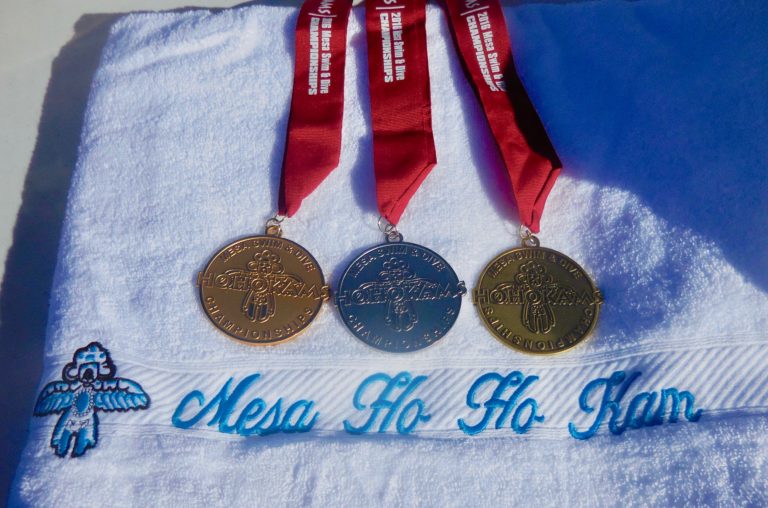 The meet is held in late October prior to the State Swim Meet. It has been, and continues to be, a huge success. The swimmers are given medals and trophies for winning their event and a beach towel with the Mesa HoHoKam emblem on the towel. All participants are presented with a t-shirt indicating that they participated in the meet.

The HoHoKams set up the meet, each of the eight lanes are manned with three HoHoKams, they time each lane and then record the times for each of the swimmers in their respective lanes.

Over the years as new High Schools were built in Mesa, they were invited to participate in the meet.

Each school also had divers that had annual events, eventually the school’s
diving coaches were approached to see if they would like to be a part of
the meet. They were very interested and a diving competition was added the meet.

The meet is a two day event, usually held on the last Friday & Saturday
in October at Kino Junior High School Aquatic Center, 848 N. Horne St.
in Mesa. The diving portion of the event takes place on Friday.
The swimming prelims are on Friday with the finals taking place on Saturday morning.

Several years back the HoHoKams wanted to do more for the swimmers, divers and coaches, so they started providing a BBQ on Saturday where they cooked hamburgers & hot dogs for the participants while the winners were announced.

This has and continues to be one of the HoHoKams signature events in helping & serving youth sports in the East Valley.